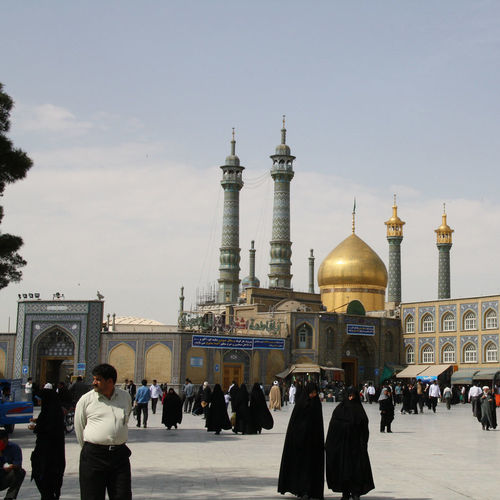 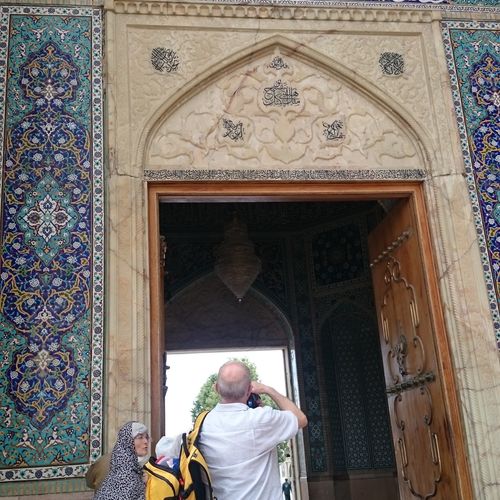 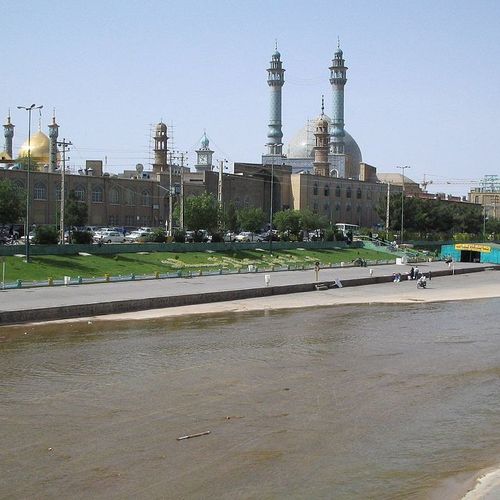 Qom or 'Ghom' is located in the south west of Tehran and is the capital of Qom province and the city's population is 1,292,283 according to a 2016 census.

The meaning of the name Qom is derived from the word straw-shelter or hut because in the past shepherds used to take rest in these shelters which were built near seasonal rivers and ponds where their animals could drink, and these are located in the Qom we know today.

The city of Qom is located on the bank of the River Qom and on the way to the ancient Silk Road. It is also located on a road that links north and south Iran.

Qom has a hot desert climate with hot summers and cold winters. It has low rainfall and is in danger of serious drought in the centre of Iran.

The main water resource is not from the river of Qom but is actually from Lorestan province which is located between the Zagros Mountains.

Qom is known for its high quality silk carpets and is the centre for Shia scholars. For this reason it is known as the capital of the Shia internet world and is the biggest publisher of Shia Islamic books, software and media in the world.

Qom is like the Vatican City of Iran, especially after the Islamic Revoluion of Iran which made the city the second biggest religious city in Iran after Mashhad.

The city has the highest level of immigrants in Iran from various countries including Iraq, Lebanon, Syria, Pakistan, and Afghanistan who work there or have gone there to study religious courses.

The first inhabitants in Qom dates back to 10,000 years ago.

During the Sassanian era between the 3rd - 7th AD the majority of people were Zoroastrian and the city was called 'Memjan' and a famous Sassanian king 'Qobad' rebuilt the city.

Qom was famous for its high quality Saffron during the era of another Sassanian king 'Khosro Parviz'.

After the Islamic period, Qom rebelled against the Arab caliphs and sometimes even refused to receive their taxes.

The city was completely destroyed when the Mongols invaded Iran and never fully recovered until the 16th - 17th centuries under the Shia government of Iran.

During the 18th century, Iranian governments didn't pay enough attention to Qom and the boom days of the city didn't arrive until the 19th century.

In the First World War, Qom was occupied by the Russian and British armies but only for a short period of time until they were forced out of the city.

In the 20th century, Qom turned out to be one of the main cities actively against the Pahlavi dynasty.

Qom is considered to be the second most religious city in Iran because of the Shrine of Fatemeh Masoumeh who was the sister of Imam Reza.

Another popular religious site for pilgrims is located outside of the city and is called Jamkaran.

There are many religious theological centres and schools that are located in the city that were built during different periods.

Here is a list of the most important attractions:

1) Shrine of Fatemeh bint Musa - The sister of Imam Ali ibn Musa Reza and the daughter of Imam Musa Kazim. Fatemeh bint Musa lived between 790 -816 AD, and in her short lifespan she was famous for her wisdom, holyness and her belief in her brother. Fatemeh was born in Medina and learnt Islamic knowledge from her father who was the seventh of twelve Shia Imams and a descendant of the Prophet Muhammed. After her father was killed in prison by the Abbasid caliphate, her brother Imam Reza looked after her. When Ali Al-Reza was chosen as crown prince he was forced to live in the Khorosan province of Iran. One year later, Fatemeh decided to join her brother, but unfortunately, she never had the chance to do so due to having lung disease and died on route to Mashhad in the city of Qom. A shrine was built on her grave around the 9th century by Saljuk kings and was developed under the rule of the Saffavid dynasty during the 16th-17th centuries.

3) Jamkaran - Jamkarans history dates back over 3,000 years whose population is around 2,000 and is just 6 km from Qom. Iranians believe that a Shia religious leader or Mullah visited the twelfth Imam (Imam Mehdi) there in 393 AH or 1002 AD, and after that in the honour of the twelfth Imam they built a shrine there.

Ashura and Tasua are two of the most important religious ceremonies in Iran and in Qom it is followed on a much larger scale. Eid Qhorban, Nimeh Shaban and the arrival of Fatemeh bint Musa are also celebrated hugely.

1) Monabat Kari- The oldest wooden handicrafts in Qom.
2) Silk Carpets - These carpet masterpieces are just 80 years' old. Pure silk carpets originally came from Kashan and found their way to Qom because the weavers taught the larger workforce who lived there. 90% of these carpets are exported overseas as luxury carpets.
3) Sohan - A Persian saffron-flavoured brittle candy coated in nuts.
4) Kolucheh - Persian cookies
5) Halwa - A semolina-based dish with many different flavours including saffron, nuts and dried fruit.
6) Dam Pokht - A rice dish cooked with lentils, vegetables and meat.
7) Abghoost Bozbash - A meat dish.
8) Kal Joosh - A watery stew with or without meat containing Kashk.